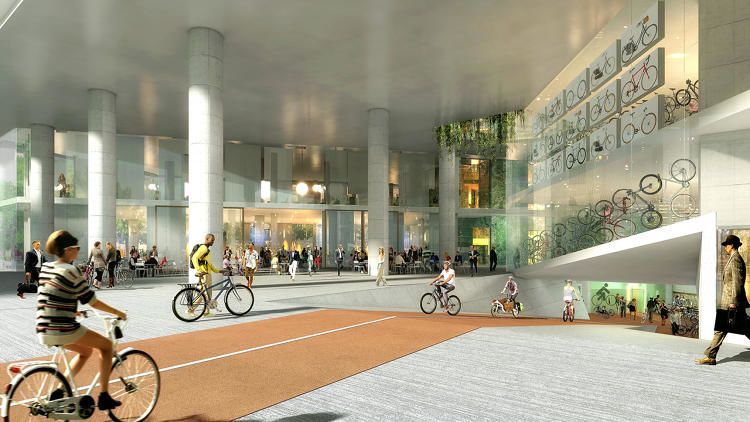 The Oslo Solar Building is Designed for Bike Storage and Repairs

Katherine Pendrill — April 1, 2016 — Eco
References: code.no & fastcoexist
Share on Facebook Share on Twitter Share on LinkedIn Share on Pinterest
'Oslo Solar' is a new high-rise that will cater to the needs of cyclists and those who drive electric cars. With more consumers turning to eco-friendly forms of transport, there is a growing need for office buildings that accommodate the demands of a car-free commute. This office building demonstrates the future of modern high-rises with several spaces dedicated to cyclists.

Oslo Solar is an office tower that is set to be built in downtown Oslo, Norway. Unlike other office buildings, the high-rise will feature a ramp for cyclists to glide into the building, parking spaces for 500 bicycles, a bike-wash station and even a repair shop for maintenance. In addition, the building will include locker rooms so that cyclists can shower and change after their morning commute. For those who need to travel by car, the building will offer 10 charging stations for electric vehicles.

The new building not only caters to those who already bike to work, but it also encourages other professionals to consider trading in their car for something more eco-friendly.
3.6
Score
Popularity
Activity
Freshness
View Innovation Webinars

Solar-Powered Charging Stations
The 'Point.One S' is an Eco-Friendly Alternative by BMW