Batman vs Bin Laden
Next
Set of
Related
Ideas 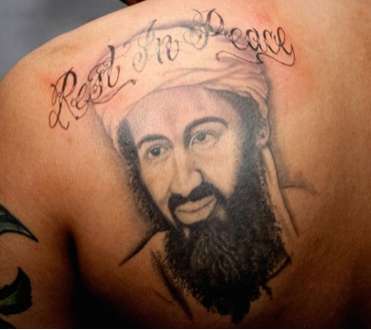 Osama Bin Laden Tattoos are Inking Bodies All Over the Place

Emily Evans — May 5, 2011 — Unique
References: walyou & viceland
Share on Facebook Share on Twitter Share on LinkedIn Share on Pinterest
Osama Bin Laden was shot and killed by American forces on May 1st. Now, just a few days later, unusual tribute tattoos are popping up all over the Internet! Who could have guessed that a terrorist like Osama Bin Laden would be so quickly inked onto so many people's bodies?

The terrorist dictator’s face has become easily recognizable through the great deal of media coverage that he has received over the years. I suppose that among the millions of citizens celebrating his death, there are also evidently some mourners. However, the number of Osama Bin Laden tattoos with a bullet whole through his head appears to be far greater!

His memory will continue to be ingrained into history as well as inspire tattoos throughout time -- most in celebration of his death, with the odd R.I.P tat along the way. Check out the gallery to see some of these Osama Bin Laden tattoos.