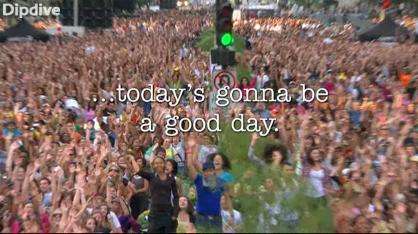 Bianca — September 11, 2009 — Pop Culture
References: oprah
Share on Facebook Share on Twitter Share on LinkedIn Share on Pinterest
We've seen some innovative guerrilla dances, but the Oprah flash mob has got to be the biggest! A group of 21,000 Oprah fans performed a choreographed dance on Chicago's Magnificent Mile to the song "I Gotta Feeling" by the Black Eyed Peas. The stunt was arranged to celebrate the start of the 24th season of the Oprah Winfrey show.

Watch as one girl bounces around dramatically at the very front of the crowd while the rest of audience stands looking seriously, some grinning a little, appearing to be making fun of her. After a few seconds, however, the people directly next to and behind her begin dancing wildly too. Before you know it, the whole crowd is dancing in sync.

The Oprah flash mob -- titled Oprah's Kickoff Party Dance -- signifies the explosion of the guerrilla street dancing phenomenon. As you can see from the articles below, we've seen everything from Hammer Dance tributes (complete with shiny gold pants) to Michael Jackson flash mobs around the world.