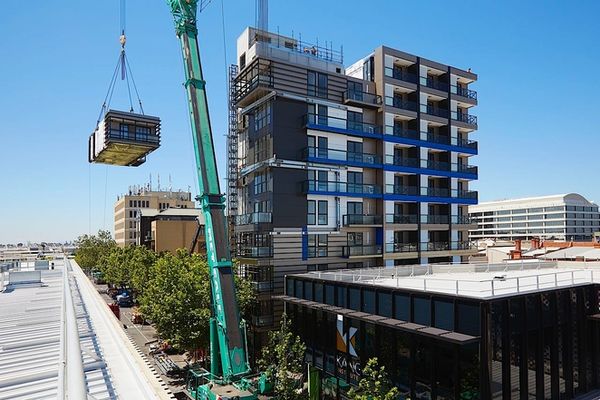 Using a Prefab System, the One9 Building Went Up in Just Five Days

Laura McQuarrie — April 30, 2014 — Eco
References: hickory.au & treehugger
Share on Facebook Share on Twitter Share on LinkedIn Share on Pinterest
If you lived in Melbourne and were away for the five days it took to construct the One9 building, it would have been a total shocker to return and see that a brand new apartment complex had somehow appeared up during your absence.

The One9 is a fairly ordinary building with a total of nine levels, with a combination of 34 one and two bedroom apartments. The remarkably fast construction time of the building can be attributed to the Hickory Building Systems' prefab system, which is designed to speed up the "onsite and offsite construction programs by up to 50%." It isn't called a modular system, because the units aren't fixed in size and although the One9 is small, this system is said to be able to handle 70 storey constructions as well.

As well as being incredibly speedy, the system reduces material and energy waste in addition to increasing the quality and safety of the build.
4.9
Score
Popularity
Activity
Freshness
Get the 2021 Trend Report FREE