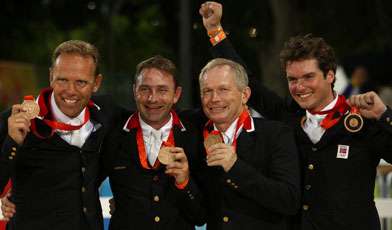 Pearl — August 22, 2008 — Lifestyle
References: cbc
Share on Facebook Share on Twitter Share on LinkedIn Share on Pinterest
Several news reports are emerging after four horses in equestrian events were tested positive for doping. The shocker is the Norwegian team pictured now stands to lose their bronze medal. The horse caught up in the scandal is the hapless Camiro ridden by Tony Hansen. This team is now provisionally suspended. The Swiss team, which placed fourth stands to gain if Norway is disqualified. US and Canada won gold and silver respectively in that event.

The horse including three others from Brazil, Ireland and Germany tested positive for capsaicin used as a painkiller. Capsaicin is the chemical which makes hot peppers sting.

CBC (Canada) Sports analyst, Beth Underhill explained that the medication was rubbed on, absorbed into the horse’s body and thus detected in routine testing of the horses’ urine samples. She speculated that the use of capsaicin is not so much to relieve pain but to make the horses’ legs much more sensitive and thus make the animals more cautious about hitting the barriers in show-jumping. She also said, “I find it shocking that they would take this kind of risk”

Three of the four riders are now suspended from the individual competition (the German rider did not enter the event). All the horses will have to endure a second round of testing before final decisions are made.
1.8
Score
Popularity
Activity
Freshness
Get Better and Faster