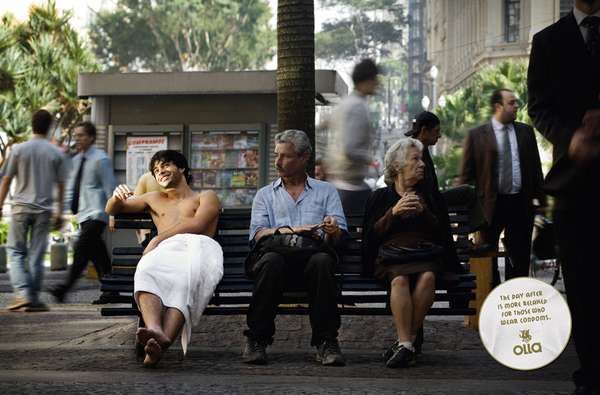 mediterranean — February 22, 2008 — Naughty
References: arabaquarius.blogspot
Share on Facebook Share on Twitter Share on LinkedIn Share on Pinterest
This new ad campaign for Olla condoms got me thinking about how hard it is to advertise certain brands. The tag line of the campaign is "The day after is more relaxed for those who wear condoms." The only indicator of the brand is a printed 'Olla' underneath. So when you think about it, the effect is more of an advertisement for condoms in general, as a category, as opposed to a specific brand. A guy seeing this ad and getting the message might just as well pick up a durex or any other condom brand.

The campaign itself is pretty creative. It shows a guy wrapped in a towel, sitting relaxed and grinning having a smoke (a typical post-sex guy image) while the people around him look worried and uneasy (supposedly for not wearing a condom). They use a school, a bench, a bus stop and a bus as the backdrop. The ads were photographed by ClÃ¡udio Elisabetsky for age, SÃ£o Paulo, Brazil agency.


Check out the NYC campaign for free condoms and safe sex: