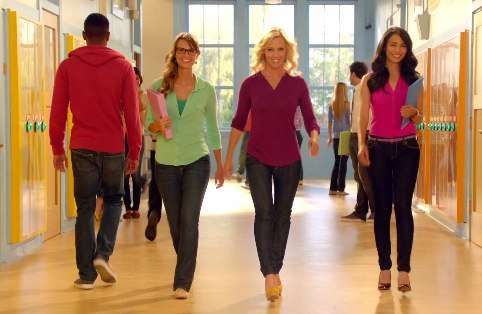 Meghan Young — August 9, 2012 — Marketing
References: cpbgroup & adrants
Share on Facebook Share on Twitter Share on LinkedIn Share on Pinterest
Once again this family-friendly retailer has reunited 90s TV stars with their Old Navy Why Choose? commercial. First it was 'Blossom,' and now its 90210. Starring Jenny Garth, Luke Perry and Jason Priestly, fans are once again reminded of their dramatic love triangle. But instead of choosing between the badass and the sweetheart, Garth has decided to go with Old Navy Jeans.

Executed by international ad agency CP+B, the Old Navy Why Choose? commercial takes place at Funnovations High, where Garth, Perry and Priestly now teach at. Advertising the brand's back to school special, namely their $19 famous jeans, Garth struts her stuff down the high school hallway. Not only does this campaign get people excited to see more 90210 alums, it also leaves people wondering what other reunions are in store.
4.1
Score
Popularity
Activity
Freshness
Jeremy Gutsche Keynote Speaker