Obesity Up In 31 States 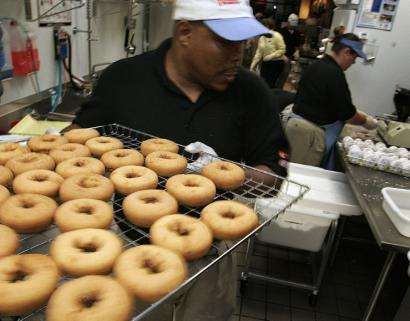 As obesity rates climb in 31 states, Dunkin' Donuts has decided to ban most trans fats in its deep-fried pastries. The timing of their announcement couldn't have been more perfect. They released the news that they would improve the nutrition of their signature goodies on the same day another press release announced that the obesity epidemic has worsened in the US.

"Mississippi became the first state to crack the 30 percent barrier for adult residents considered to be obese. West Virginia and Alabama are just slightly behind, according to the Trust for America's Health, a research group that focuses on disease prevention. Texas ranked 12th overall with an obesity rate at 26.3 percent."

Looks like Dunkin' is right on the ball, then. As of October 15, the chain will use alternative oils and will recreate over 50 food items, including doughnuts. If you're a big fan of the Canton, Mass. chain, you better head on over ASAP -- there's no way they'll ever taste as good without the killer fats. Baskin-Robbins, the ice cream chain owned by Dunkin' Brands Inc. will be free of trans fats by January 1.

When junk food loses it's junk, will it also lose its appeal?

Not long from now, sugary treats won't taste nearly as good; at that point, you may as well just eat your greens!