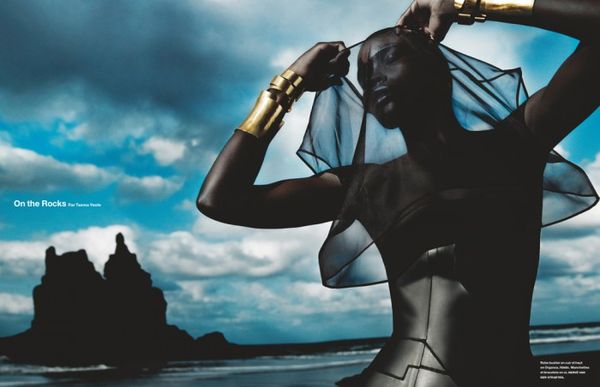 The Numero 'On The Rocks' Photoshoot Stars Jeneil Williams

Meghan Young — January 30, 2014 — Fashion
References: numero-magazine & models
The Numero 'On The Rocks' editorial is full of drama. Shot on the shores of Tenerife, the largest and most populous island of the seven Canary Islands, the backdrop provides the perfect sinister atmosphere, which elevates the mystical energy of the looks showcased throughout. As though capturing the queen of a futuristic tribe, the photoshoot is full of strength and beauty.

Shot by Spanish photographer Txema Yeste, the Numero 'On The Rocks' editorial appears in the latest issue of the publication. It stars model Jeneil Williams, who strikes a dark figure in a range of black ensembles Balenciaga, Dolce & Gabbana and Blumarine. The luxe looks were styled by Franck Benhamou with artistic makeup by Violette.
6.4
Score
Popularity
Activity
Freshness