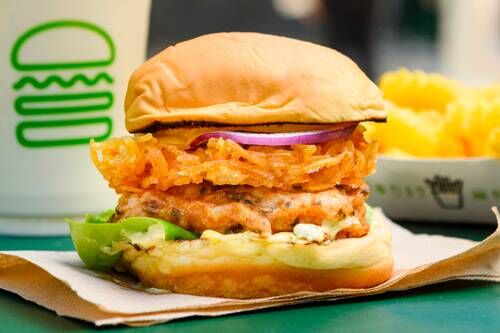 Amy Duong — May 4, 2021 — Lifestyle
References: hypebeast
Share on Facebook Share on Twitter Share on LinkedIn Share on Pinterest
Shake Shack continues to add to its Now Serving series as the fast-food chain taps Michelin star Chef Junghyun Park, also known as 'JP.' His team at the Atoboy restaurant creates a special shrimp burger, stemming from the popular dish in South Korea. This marks the second time that Shake Shack is adding a seafood option to its menu.

The dish features a fried crispy shrimp patty with hash browns, the Atoboy Grenada pepper sauce, butter lettuce, and shaved red onions -- all of which rests between a toasted potato bun. The upcoming burger is set to launch officially on May 6th exclusively at the Madison Square Park location, with orders placed ahead of time, or for delivery and pick up in the designated zones.

Cauliflower-Based Burgers
The Dr. Praeger's Cauliflower Veggie Burger is Made with Six Vegetables