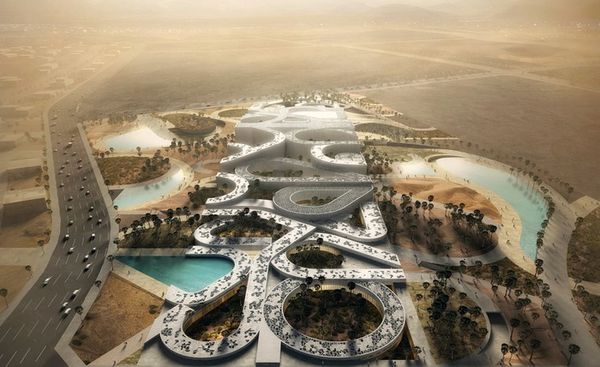 Meghan Young — June 18, 2014 — Art & Design
References: mecanoo.nl & psfk
The Noble Qur’an Oasis competition has inspired some incredibly creative submissions, one of which was conceived by Dutch architecture firm Mecanoo. Channeling the ancient aesthetic of Arabic calligraphy and the Qur’an, it is a series of interconnected buildings that is particularly striking when view from above.

The proposal for the Noble Qur'an Oasis competition found its starting point in this passage: "He cast firmly embedded mountains on the earth so it would not move under you, and rivers and pathways so that hopefully you would be guided. (Qur’an, 16:15)." An important symbol throughout the writings of Islam, the first thing people are greeted with when walking into the complex are undulating, high walls that bring to mind mountain ranges.
2.8
Score
Popularity
Activity
Freshness