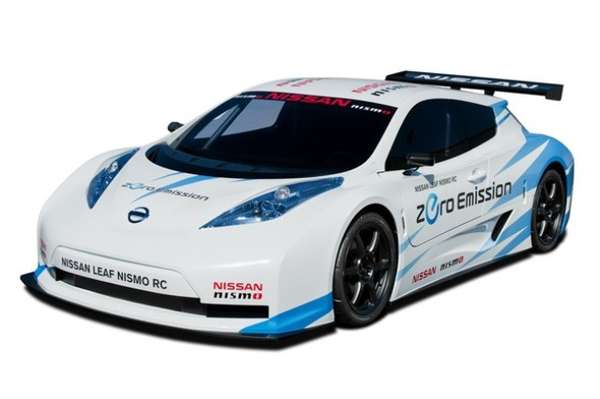 The Nissan Leaf NISMO RC is Ready to Race

Michael Hines — April 19, 2011 — Autos
References: autoblog
Share on Facebook Share on Twitter Share on LinkedIn Share on Pinterest
Nissan is set to unveil a badass racing version of its Leaf EV at the 2011 New York Auto Show. The Nissan Leaf NISMO RC is a lighter and leaner version of the Leaf, designed to show off the car's competitive potential.

The Nissan Leaf NISMO RC may be called a Leaf, but it is different from its four-door counterpart in almost every way. The Leaf NISMO RC is 40 percent lighter than the production Leaf, weighing in at 2,068 pounds. It also has no carpeting, stereo or navigation system and the car's battery has been moved to the middle for weight distribution reasons. This racing Leaf is also about a foot shorter than its four-door forefather and has an underbelly scraping 2.7 inches of ground clearance.

All of these modifications produce a ride that can do 0-60 in 6.95 seconds and top out at 93 mph. The Nissan Leaf NISMO RC could run under racing conditions for 20 minutes, requiring a 30-minute quick charge to get back to 80 percent battery power. Nissan has no plans to race their new ride anytime soon, although it is nice to see them thinking outside the box when it comes to Leaf offshoots.
0.4
Score
Popularity
Activity
Freshness
View Innovation Webinars