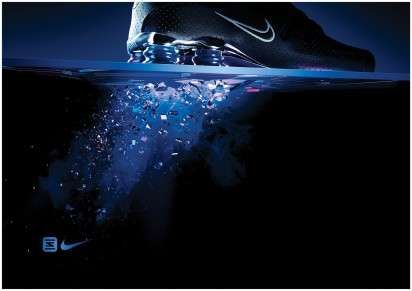 The Nike Shox Ad Campaign Tears up the Ground

Meghan Young — August 29, 2011 — Marketing
References: nike & ibelieveinadv
Share on Facebook Share on Twitter Share on LinkedIn Share on Pinterest
You may not have realized it until stumbling upon the Nike Shox ad campaign, but these are some earth-shattering shoes. Of course, despite its ability to tear up the ground, leaving your opponents (even if that opponent is simply yourself) in the dust, it doesn't tear up your muscles and joints. Instead, it protects you while it ravages the land it bears its weight upon.

Conceived and executed by Sydney-based ad agency US, the Nike Shox ad campaign is as simple and direct as it is bold and dramatic. Focusing only on the shoe's crowning feature, its shock-absorbing heels, the Nike Shox ad campaign seems to also have a subtle earth, wind and fire theme thanks to the colors used. Although those hues simply signal the three different colors the Nike Shox is available in.
2
Score
Popularity
Activity
Freshness
Get Better and Faster