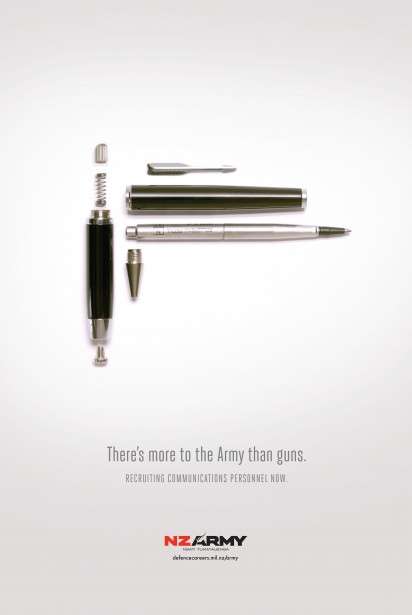 Meghan Young — October 18, 2012 — Marketing
References: saatchi & ibelieveinadv
Share on Facebook Share on Twitter Share on LinkedIn Share on Pinterest
The New Zealand Army campaign sends a strong message in a clever way. Clean and modern, the posters sport images of a pen, needle and stapler, all of which have been taken apart with the parts neatly displayed. Coupled with the tag line, "There's more to the Army than guns," the print ads advertise the need for operational personnel, medical personnel and communications personnel.

Conceived and executed by the Saatchi & Saatchi ad agency branch based in New Zealand, the New Zealand Army campaign was creative directed by Slade Gill. Shot by photographer Fraser Clements and retouched by Nick Browne, the print ads are minimalistic and masculine, which is appropriate considering the audience they will be appealing to.
1.4
Score
Popularity
Activity
Freshness
Get Better and Faster