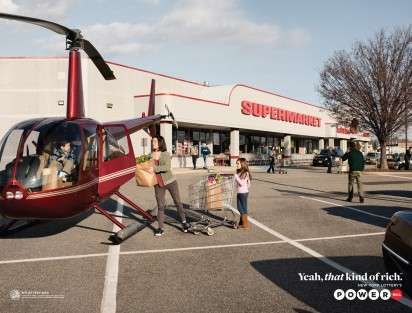 Meghan Young — January 29, 2012 — Marketing
References: ddb & ibelieveinadv
Share on Facebook Share on Twitter Share on LinkedIn Share on Pinterest
From helicoptered grocery runs to personal roadways, the New York Lottery's Powerball ad campaign shows the potential wealth a person could have if he or she played this particular game. With the slogan, "Yeah, that kind of rich," it puts this lottery game on a whole other level.

Playfully conceived by New York-based ad agency DDB, the New York Lottery's Powerball ad campaign may be in line with other lottery marketing tactics, but instead of focusing on extreme adventures and typical lavish lifestyles, it takes it up a notch to show just how drastically lives can change in an instant. Photographed by Brad Harris with art direction by Tony Bartolucci, the scenes may seem ludicrous, but that is exactly what the winnings would be as well.
6
Score
Popularity
Activity
Freshness
Access Advisory Services