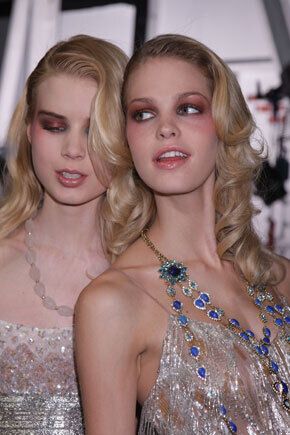 Celebrities, VIPs and the world's top fashion journalists gathered to take in the dazzling new designs by the world's most renowned designers.

Starting off the day at 10 a.m. was Lacoste in the tents at Bryant Park. That show was followed by Academy of Art University at the Promenade, then Abaete at the Salon. The afternoon included the latest Fall 2008 collections from Araks & Mara Hoffman, Alexandre Herchcovitch, Juan Carlos Obando and Z Zegna and Verrier.

The evening included some brand bigger with the younger crowds like Sass & Bide and Rock & Republic, and the evening ended with Akiko Ogawa.

Some background on the designers:

Lacoste - The brand known internationally for its crocodile logo was started in 1933 in France, and is still recognized as a classic brand worldwide; they're best known for their tennis shirts, but they make a wide range of hip fashion apparel as was seen in their Fall 2008 collection.

Academy of Art University - A private San Francisco University that has received international recognition for its excellent fashion school.

Abaete - Soho-based luxury fashion retailer with designs from Laura Poretzky. She started the line in 2003 with resort fashions and bathing suits that inspired him from her childhood years, but has branched out to produce a wide range of other designs, as seen in her latest collection.

Araks & Mara Hoffman - Araks (loved by Sarah Jessica Parker) has been regarded as a very talented lingerie designer, so her choice to team with Mara, a designer known for very elaborative and bold designs, was an interesting decision, but worked out beneficially for both parties. Mara's designs have been seen on celebrities like Kate Hudson, Naomi Campbell, Jessica Simpson, Halle Berry and the fashion stylist of Sex and the City and The Devil Wears Prada, Patricia Field.

Alexandre Herchcovitch - The SÃ£o Paulo, Brazil native doesn't stick with ordinary designs; in fact, he's quite well known for his use of skull and bones motifs. He's a designer people tend to either love or hate.

Z Zegna - This Italian designer of fine menswear turned out a well polished collection. His line tends to be geared at the somewhat young, highly style conscious and very affluent types. His fashions are always a pleasure to the eye; as are the models he chooses!

Verrier - Ashleigh Verrier was awarded Designer of the Year in 2004 by Parsons after which Saks bought her entire thesis collection. In Spring 2007, she was sponsored to show her collection at New York Fashion week, so it's a pleasure to see her designs strike so well with her audience again.

Sass & Bide - This Australian fashion label is all about having fun and is generally favoured among daring trend setters. This is hip starlet fashion at its best, and you'll need a rock star bank account to afford it; think $120 for a basic tank top. Celebrity fans include Kate Moss, Kylie Minogue, Elle Macpherson, Victoria Beckham, Rosario Dawson and Mischa Barton.

Rock & Republic - My favourite of them all, but that probably has to do with my age. Rock & Republic can be found in lot of young fashion stores, although it has a price tag most young men and women can't afford. No wonder it's been seen on celebrities like Nicole Richie, Jessica Alba, Carmen Electra and Britney Spears. It's also the brand under which Victoria Beckham's line of jeans are.

Akiko Ogawa - This young Japanese designer graduated from Kuwasawa Design School in 1995 and established her brand in 2001, the first international collection was shown in Paris which led to her discover by Barneys New York Japan. The first time she showed in NYC was in 2003 and in 2005, she was honored with the Kawasawa Design Award.