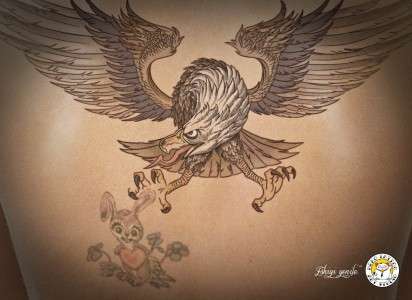 Meghan Young — May 15, 2012 — Marketing
References: publicisyorum & ibelieveinadv
The Neko Tattoo Art Studio ad campaign addresses tattoo regrets in a creative, clever and hilarious way. Instead of dwelling on past ‘mistakes,’ it provides an intriguing solution. Although they can ”cover up the old,” as stated in the tag line, the print ads show that people can play off of their existing and outgrown ink designs instead.

Created by Istanbul-based ad agency Publicis Yorum, the Neko Tattoo Art Studio ad campaign shows more grown-up, manly tattoos schooling the youthful ones. For instance, an American eagle is seen swooping down to capture a cartoon bunny while an octopus is crushing a ship.