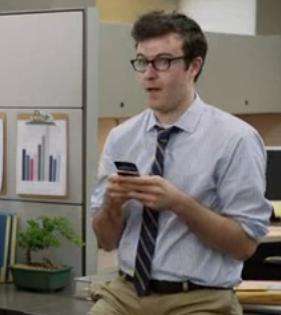 Nate Dern appeared in this AT&T commercial promoting the BlackBerry Torch 4G. The ad takes a 'The Office'-type spin -- with the standard fluorescent lights, cubicles and disengaged employees -- showing a manager telling his subordinates to continue playing on their phones rather than working. While the ad is amusing and includes funny characters -- you'll chuckle at the 'Mayor Dennis' part -- it is Dern's one measly line "Huh?" that has catapulted him to star status online. Viewers are embracing him as a folk hero, says AdWeek.

It's odd that one little word would garner Nate Dern a virtual celeb, but hey, maybe this guy's time was due (it was his first commercial after three years of auditions). Watch the video and decide for yourself whether the "Huh?" is worth all this attention.
2
Score
Popularity
Activity
Freshness
Get Better and Faster