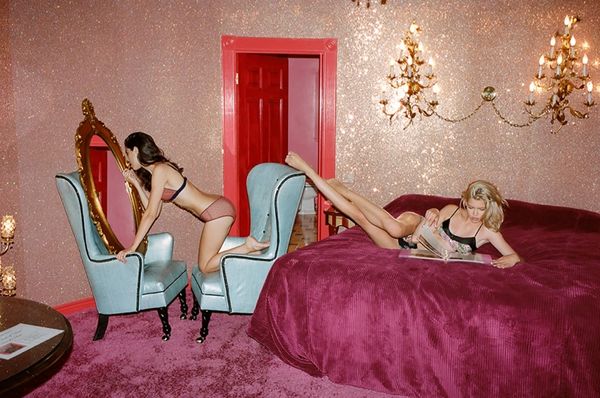 Vasiliki Marapas — September 25, 2013 — Fashion
References: sixwolves & fashiongonerogue
Share on Facebook Share on Twitter Share on LinkedIn Share on Pinterest
Jason Lee Parry is the man behind the lens for Nasty Gal’s 2013 Campaign starring Anna Speckhart and Valerija Sestic. The photo shoot has a fun, colorful road trip theme, featuring shots of the girls carrying luggage, reclining in various hotel rooms and generally having a blast. One shot has the girls sprawled atop a bed in a magenta-themed room, complete with glitters and chandeliers.

Another photo has the girls playing dress-up in fuzzy, pastel-colored cropped sweaters in front of a glittery wall. And finally, the photo spread captures the girls engaging in some outdoorsy fun from bike riding, to jumping into a lake fully clothed, to joy riding in a white convertible. Overall, Parry captures an insatiable sense of fun and adventure in this infectious road trip photo spread – if this doesn't inspire you to take off on an impromptu trip, I don’t know what will!
6.4
Score
Popularity
Activity
Freshness
Attend Future Festival