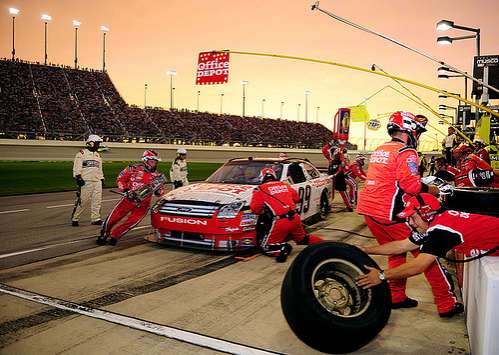 This gallery highlights some of the NASCAR action from the viewpoint of spectators. Images of the NASCAR Sprint Cup Series LifeLock.com 400 auto race, which was held this weekend at the Chicagoland Speedway in Joliet, Ill, are also featured in this article, offering a good taste of the weather that caused the July 10 race to be postponed. Another image shows the Office Depot Ford which was autographed by employees from around the world.

Photo credits go to Walter G. Arce and amanda4843 who posted them on Flickr, the creative community we suspect will be the future photo resource of even the mainstream media.

Here are some more great Flickr shots that offer inside views into global events:

29 Fast-Paced NASCAR Features
With Only One Race Left Before the NASCAR Chase 2012, Stress is High