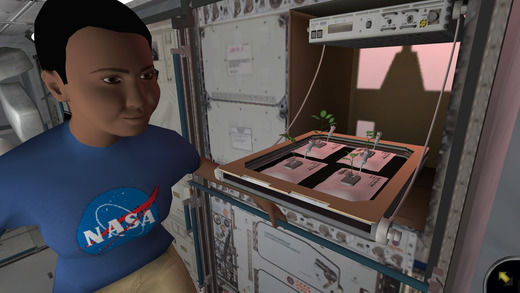 Joey Haar — January 16, 2017 — Tech
References: itunes.apple & gizmodo
Share on Facebook Share on Twitter Share on LinkedIn Share on Pinterest
'NASA Science Investigations: Plant Growth' is an educational game from the American space organization that lets people play as an astronaut working in several different areas of the International Space Station. As its name suggests, the core of the game involves learning about and virtually growing crops in space, knowledge that is likely to become increasingly important in the coming decades.

NASA Science Investigations is set up as a first-person simulation. In the game, users learn how to maneuver in a space station in zero gravity. Since the game is a NASA release, the aspects of the ISS are all replicated precisely to their real specifications, making for a more authentic simulation. Eventually, users learn the mechanics of growing produce in space, with a mission of growing a salad for the crew.
2.9
Score
Popularity
Activity
Freshness
Get Trend Hunter Dashboard