Parodies About Ocuplets
Next
Set of
Related
Ideas 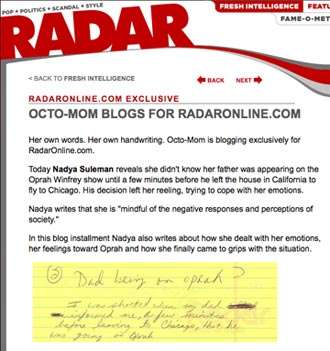 Marissa Brassfield — March 3, 2009 — Pop Culture
References: radaronline & radaronline
Nadya Suleman has managed to do the unthinkable and extend her 15 minutes of fame even longer, courtesy of Radar Online. The site announced an hour or so ago that Suleman is now blogging exclusively for Radar Online.

Nadya Suleman’s blogs consist of handwritten entries on yellow ruled paper. You can download the two PDFs here and here. In her inaugural installment, Nadya Suleman divulges that she wasn’t aware of her father’s upcoming appearance on “The Oprah Winfrey Show” until just a few minutes before he was set to leave to fly to Chicago.

One thing’s for sure: Nadya Suleman won’t be on welfare much longer. According to LAist, Suleman received $40,000 for the video interview she did with Radar Online last Friday alone.
6.6
Score
Popularity
Activity
Freshness