Don't Be Seduced By Complacency

Cross-Pollinate Your Ideas
Next
Set of
Related
Ideas 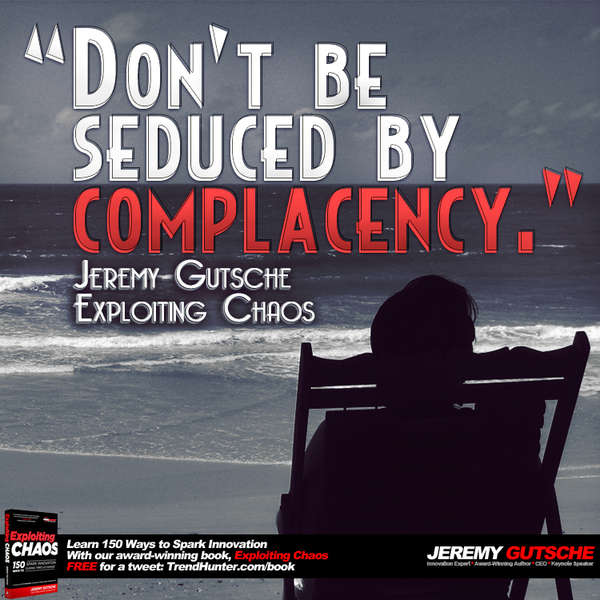 Jaime Neely — February 22, 2013 — Business
References: jeremygutsche
Share on Facebook Share on Twitter Share on LinkedIn Share on Pinterest
Offered in both his innovation keynote speeches and his award-winning book 'Exploiting Chaos' are motivating business tips to avoid complacency. Businesses that become too comfortable and complacent with the success they've already experienced run the risk of waking up one day to a very different story. Complacency creates a mindset that is wary experimenting, taking risks and tackling new challenges.

His case study of typewriter company Smith Corona shows how it became bankrupt after assuming computer word processors would take more time to become popular, hence presenting no need to make a move.

"Without the full story, Smith Corona's decline would seem to be rooted in careless decision making; however, the missed opportunity was much less obvious. Smith Corona was making a ton of money as the world's best typewriter company. No competitor could challenge that claim to fame. By 1989 revenues were at a record high: $500 million.

Incidentally, that's a lot of money.

Yes, the world was changing, but there was not an urgent need to move into unproven market. After all, if computer word processors became interesting, Smith Corona could easily just 'buy their way in.' Right?"

Unfortunately, that wasn't the case and the company crashed as a result of it being too comfortable. For tips on how to avoid this, check out the FREE copy of 'Exploiting Chaos' here.
1.6
Score
Popularity
Activity
Freshness
Access Advisory Services