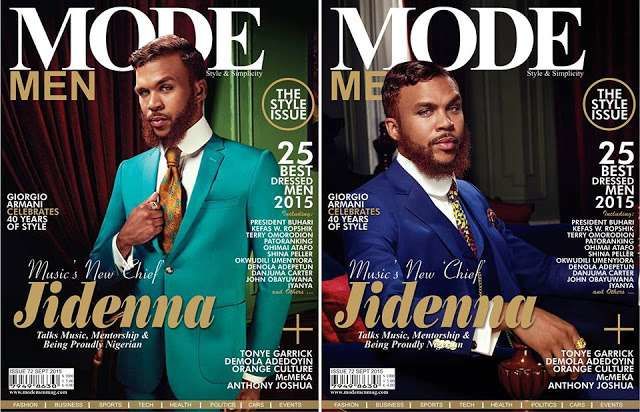 Ady Floyd — September 28, 2015 — Fashion
References: static.pulse.ng
Share on Facebook Share on Twitter Share on LinkedIn Share on Pinterest
The September 2015 issue of Mode Men Magazine uses a heavy Nigerian influence from its featured cover photograph to its fashion articles. The most notable portion of this issue of Mode Men Magazine is the cover, which showcases the dapperly dressed Nigerian-American singer and songwriter Jidenna.

This artist is well known for his recent single titled 'Classic Man,' which speaks to the nature of this particular editorial. The artist is dressed in a divine vibrant teal suit and his copper-colored hair and signature beard were "tamed neatly and well groomed."

In addition to the cover photo, Jidenna appears in the magazine with an accompanying interview and more images. The magazine's issue also features 25 best dressed Nigerian men, which includes President Buhari and Kefas Ropshik. Additionally, there was a "spotlight on Nigerian menswear designers Adebayo Oke-Lawal, McMeka and Jason Porsche" to solidify the issue's theme of the month.
2
Score
Popularity
Activity
Freshness
Get Better and Faster