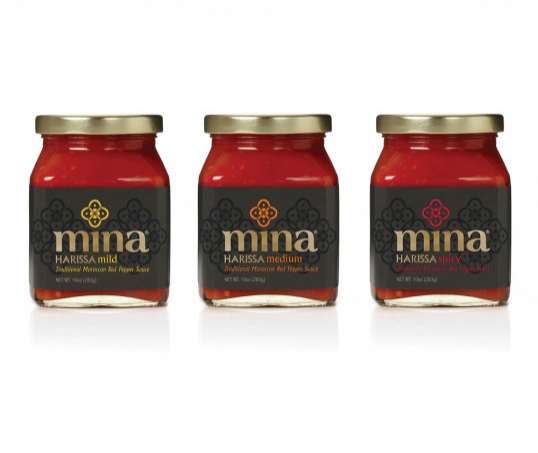 The sauce is available in three different varieties: mild, medium and spicy. In recent years, Moroccan food has grown in popularity and off the shelf Moroccan-inspired condiments have been springing up everywhere, so in order to separate themselves from the pack, Mina Harissa turned to design firm the Monday Collective to help them craft an eye-catching label for the savory, traditional sauce.

Playing with the motif of red pepper, Monday Collective created an emblem for the company that mimics the interior of a red pepper. Instead of rendering it realistically, the creative groups decided to employ the aesthetics commonly found in native Moroccan tiles. The petite pots of spice, demonstrate not only the condiments origin, but also its identity as a premium brand. The black backdrop on the label gives the sauce an element of class and the minimalistic typography keeps it simple but luxurious.

With hints of tradition and modern elements of class, the Mina Harissa label is sure catch more than a few eyes as they saunter down the grocery isle.
0.9
Score
Popularity
Activity
Freshness
Attend Future Festival Virtual