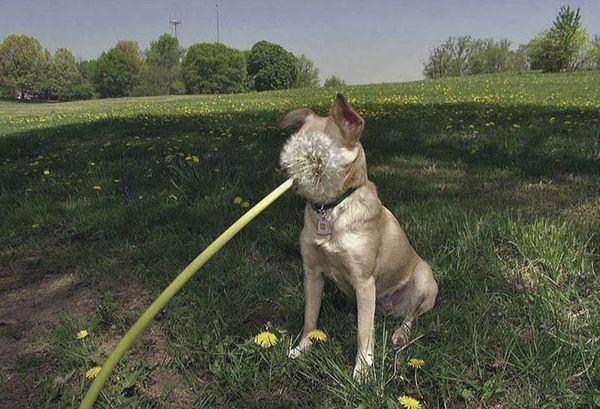 Rahul Kalvapalle — April 25, 2014 — Lifestyle
References: michaelnorthrup & featureshoot
Share on Facebook Share on Twitter Share on LinkedIn Share on Pinterest
Baltimore-based photographer Michael Northrup captures hilarious and interesting images of dogs either superimposed in front of or behind an object, or engaged in some kind of interaction with another object. The common thread running through Northrup's dog photos is that in all of them, the dog is physically interacting with some object, be it a piece of furniture, a flower or any other object.

Perhaps the highlight of Northrup's collection of more than 20 dog photos is a photo of his dog, Phoebe, standing behind a dandelion flower. The image looks like it has been Photoshopped to fuse the fluffy dandelion petals with Phoebe's head, but Northrup says the image is completely authentic, describing it as "a case of serendipity, and, as usual, it’s not preconceived -- it’s discovered.”
2.6
Score
Popularity
Activity
Freshness
View Innovation Webinars