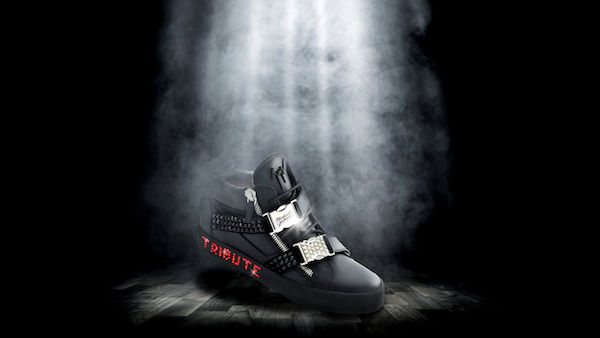 These Giuseppe Zanotti Sneakers are a Michael Jackson Tribute

Kalina Nedelcheva — November 9, 2018 — Luxury
References: julienslive & designtaxi
Share on Facebook Share on Twitter Share on LinkedIn Share on Pinterest
Luxe Italian fashion designer Giuseppe Zanotti produced a stunning footwear design that is intended to serve as a Michael Jackson tribute. The footwear is exceptionally luxurious, boasting a sporty and secure silhouette. The upper is decked out with 120 black diamonds and 55 rubies. The sneakers are black and are adorned with two silver buckles for a more striking, complete aesthetic.

Giuseppe Zanotti's Michael Jackson tribute was released in conjunction with the King of Pop's birthday. The one-of-a-kind footwear is auctioned, with a bidding price starting at $15,000 USD and an estimation between $30,000-$50,000 USD. The proceeds from the shoes are being donated to the Elizabeth Taylor AIDS Foundation.