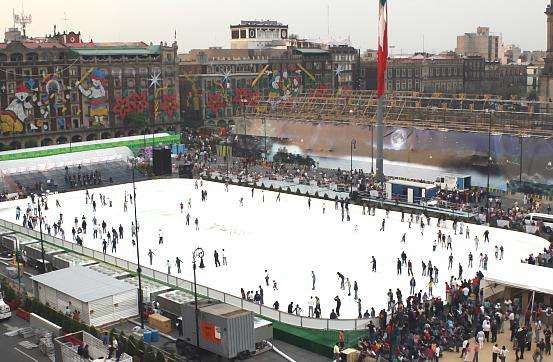 The 3,200 square meter ice rink opened on Sunday to the great curiosity of citizens, drawing in residents of the capital city who lined up in long rows to check out the spectacle. Really keen patrons even slept near the rink to ensure the could belong to the first to hit the ice.

Authorities said 1,200 people will be able to hit skate on the rink at any one time. There will be skate rentals and instructors available to teach inexperienced skaters, which will likely be the majority!

This it is the first time that residents of Mexico City can skate on ice in the Zocalo square which is surrounded by the Parliament building, the Cathedral and the city hall, and is the place of large population concentrations and political rallies.

The official commented that the 3,200 square meter rink was a contribution of around 23 sponsors who also supported the funding of 1,600 skates, eight cool off systems, two Zambonis, as well as different payments of taxes. The entire contribution reached almost 16 million pesos, which will allow for free admissions and conditions better than skating rinks in New York City and in Europe.