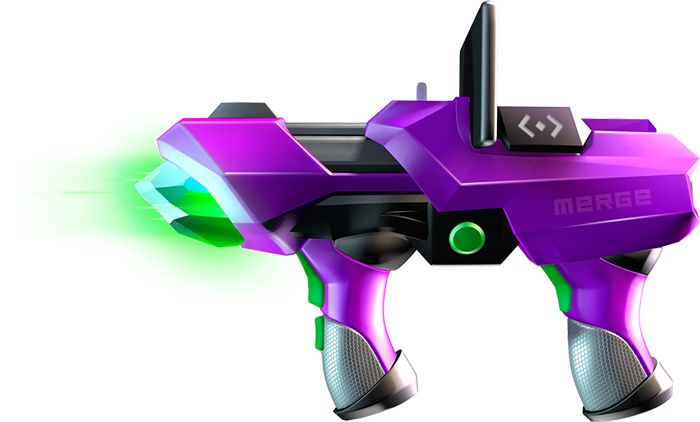 Justin Lam — January 9, 2018 — Tech
References: cnet & theverge
Share on Facebook Share on Twitter Share on LinkedIn Share on Pinterest
Merge Labs' AR blaster was recently unveiled at CES 2018, demonstrating that the company is looking to bring AR toys to the masses. The company's newest product, the '6DoF Blaster,' is an impressive toy that uses a smartphone to allow users to experience and AR environment while playing a live first person shooter. The plastic blaster has a built in mount for smartphones, where the AR world is projected, and features four buttons for reloading, zooming, slowing down an enemy target, and a trigger. The demo shown at CES was running a Merge VR game built using Apple's ARKit platform.

The name, 6DoF, comes from a term often used when discussing VR and stands for six degrees of freedom. The term is a desirable trait among VR/AR manufacturers and enthusiasts as is refers to the ability to look around and move in the VR/AR environment while still being in the virtual world. The Merge Labs AR Blaster is expected to be available in 2018 and does not yet have a price affixed to it. That being said, Merge Labs is already known for its incredibly affordable VR headset, so expect a similar affordability in the 6DoF.
5.9
Score
Popularity
Activity
Freshness
Jeremy Gutsche Keynote Speaker