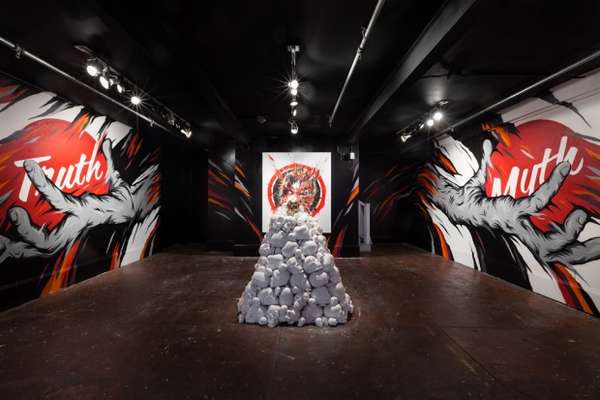 Trenton Millar — July 17, 2012 — Art & Design
References: whitewallssf & hypebeast
Share on Facebook Share on Twitter Share on LinkedIn Share on Pinterest
Australian street artist MEGGS, who is most famous for his multi-layered stencil work and posters, has opened his first solo show at White Walls in San Fransisco. The show, entitled 'Truth in Myth,' contains work that is inspired by ancient mythology and contemporary pop culture.

MEGGS works with a variety of different media in his exhibit. These include painting, sculpture and mixed media. The works bring together graffiti, heavy metal, skateboarding and graphic design influences to create pieces that would be as at home in an alley way as they would on a high-end gallery's wall. MEGGS uses mainly a red, black and orange color palette with occasional splashes of contrasting blue. The show gives off a playful, yet serious vibe -- a derivative of the comic books and ancient myths that have inspired it.