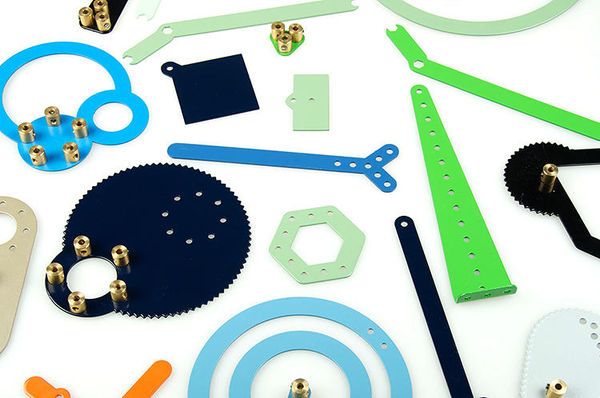 Meekaanoo by Tomm Velthuis is Inspired by a Vintage Assembly Set

Meghan Young — May 6, 2014 — Art & Design
References: bytomm & fastcodesign
Share on Facebook Share on Twitter Share on LinkedIn Share on Pinterest
Meekaanoo by Tomm Velthuis, an industrial designer based in Amsterdam, the Netherlands, is a toy set inspired by Meccano, a playful system of colorful metal plates, angle girders and pulleys invented in 1900 by British designer Frank Hornby. Whereas the original toy could be arranged and rearranged to take on familiar forms, this modern spin is made up of abstract shapes that come together to create abstract objects.

Although unorthodox, Meekaanoo by Tomm Velthuis inspires creativity on a higher level in children. The designer says, "It's more an art-piece than a product. But that fine line between art and design is, for me, the most interesting.” Through these seemingly meaningly creations, he aims "to bring back fantasy and imagination into our high-speed, pragmatic lives."
3.3
Score
Popularity
Activity
Freshness
Attend Future Festival