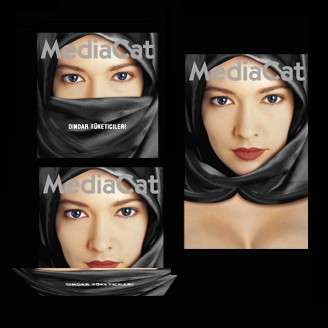 Created by advertising agency M.A.R.K.A., the cover shows the beautiful face of a woman behind a veil. However, the veil starts going down (either by turning the page or by sliding it, I am not quite sure) to slowly reveal the outline of the model’s bosom. The cover comes with a copy that reads, “Extreme Islamic consumers.”

The cover is certainly striking and the fact that the magazine’s site is fully in Turkish has people scratching their heads as to what this really means. Is it a jab at the religion or a statement about the importance of catering to conservative Muslim women in the media?

Since I do not understand the language, I leave the interpretation to you. If you know more about the magazine and the cover, let us know what you think in the comment section below.

The February cover was created under the art direction of Çağlar Cengiz.
3.7
Score
Popularity
Activity
Freshness
Get Better and Faster