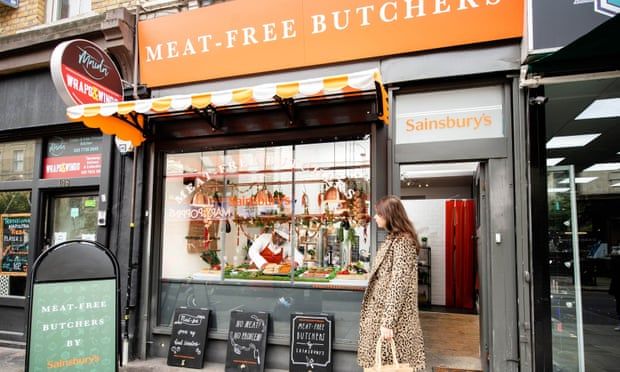 Sainsbury Launched a Vegan Butcher Display Pop-Up in the UK

Grace Mahas — June 21, 2019 — Social Good
References: sainsburys & theguardian
Share on Facebook Share on Twitter Share on LinkedIn Share on Pinterest
Sainsbury, a UK grocery and department store, recently launched a meat-free butcher shop to show how far vegan food has come. The concept was launched to help introduce consumers to plant-based food and allow them to become familiar with the products.

The display is part of a three-day long initiative and is set up as a traditional butcher shop, however, the string of sausages hanging are all vegan. The meat-free butcher store also boasts steaks made from soy and wheat protein and chorizo-themed 'shroomdogs.' Other notable products include jackfruit quarter pounders, 'sweet and smoky BBQ pulled jackfruit,' and 'Moroccan vegbabs.'

The introduction of meat-less butchers perfectly coincides with the rise of plant-based product launches by retailers and restaurants. A recent study indicated that over half of the UK population is reducing its consumption of meat. "This shift in attitude has seen manufacturers, supermarkets and restaurants scramble to cash in on the burgeoning vegan market,' states The Guardian.