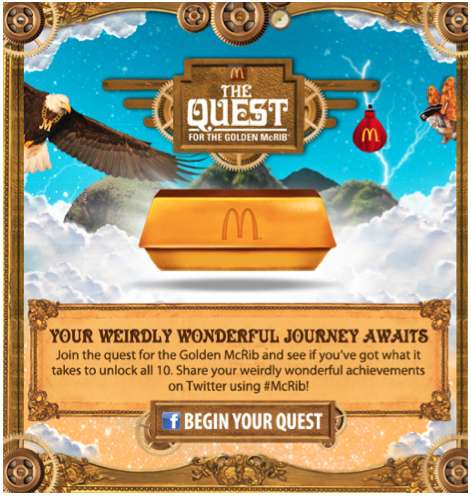 Look for a Golden McRib in the McDonald's 'The Quest' Game

The McDonald's The Quest game, fully titled 'The Quest for the Golden McRib' has players use Google Maps to hunt for golden McRibs that are hidden at different McDonald's locations across the globe. There are 10 golden McRibs to find and McDonald's makes the game a fantastical one by introducing strange characters like a giant purple elephant, a boxing bear and "viking accountants."

The McRib sandwich itself is available across the United States -- for the time being. According to Marta Fearon, marketing director of McDonald's U.S., "At this time, we can't speculate on [McRib's] return in the future, but we hope McRib fans will enjoy it now while it lasts."
3.5
Score
Popularity
Activity
Freshness
View Innovation Webinars