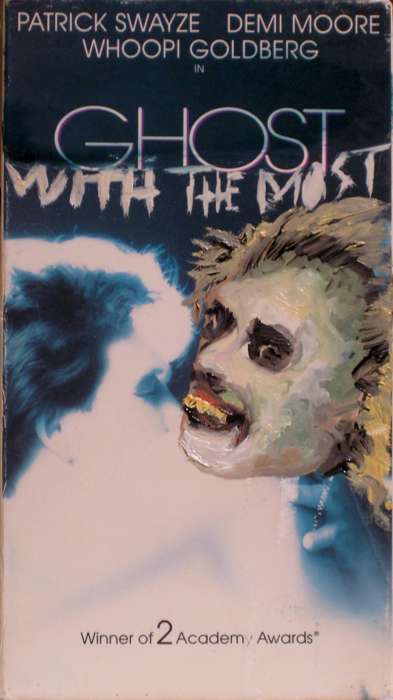 Jason Soy — April 9, 2012 — Pop Culture
References: mattlifson & brwnpaperbag
Share on Facebook Share on Twitter Share on LinkedIn Share on Pinterest
The works of Matt Lifson are always provocative, even if they sometimes push the limits of normalcy. In this particular series, you get Lifson’s trademark use of crude and occult motifs plastered onto old VHS covers in the form of oil-painted defacement. The resulting products are actually quite humorous as Tom Hanks from the movie ‘Big’ sports a pentagram on his head while wearing Boy George make-up and Whoopi Goldberg from ‘Sister Act’ has a skeletal face and is smoking a cross joint. It’s nearly impossible to browse the collection without a smirk on your face.

Other films Matt Lifson used in this series include ‘It,’ ‘Carrie,’ ‘Scrooged,’ ‘The Lost Boys,’ ‘Better Off Dead,’ ‘Misery,’ ‘Ghost,’ ‘Mickey Blue Eyes,’ ‘Bill and Ted’s Bogus Adventure,’ ‘Child’s Play 2’ and many more.