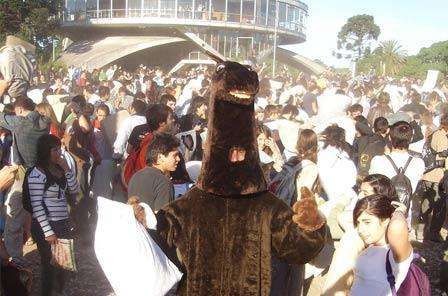 Now, the massive pillow fights have expanded all the way to Buenos Aires. The recent pillow fight took place at the square of the Planetario (Planetarium) on November 18th. Little by little the fighters arrived with pillows in their hands. They craftily lay on the grass, as if they were just relaxing of what was about to tire them out. Some ambulances, fire engines, cops and the press were getting to the area as if a real battle was about to begin. Some minutes after 5 p.m., the one thousand individuals who had gathered at the square couldn't wait for the order given by the megaphone guy and started fighting with their pillows.

In a moment, one who did not know who to hit, had the brilliant idea of shouting â€œTo the press!â€ And all the pillow bearers hit reporters, cameramen and photographers. Minute after minute the attendance was bigger and bigger. It was 6:30 p.m. in Buenos Aires and there were more than 3,000 persons fighting. It seemed it would never end. Suddenly, in order to put an end to the meeting, everybody celebrated throwing the pillows into the air. But some seconds later, it started over and it was wild. Marina Ponzi, who is 23 years of age and a student of social communication, was the organizer of the event and she told her personal experiences

You can find more exclusive pictures of the Pillow Fight at the Flickr of The Uncoolhunter.