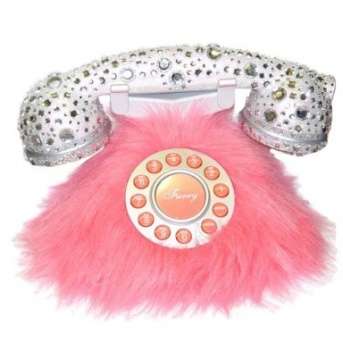 Cowbag — February 3, 2009 — Tech
References: trendhunter
Share on Facebook Share on Twitter Share on LinkedIn Share on Pinterest
It’s hilarious when men have to use overly girlie phones. For example, unlike a handbag, which a man can choose whether or not to use, he must use the phone. There is no choice, so when the only phone in the house is pink and fluffy, they’ll be trapped and forced to use something that looks ridiculous.

To clarify, I only love these pimped out pink phones because they’re so outrageously tacky; like something you find in Barbie’s House on acid. It just makes me sad that this pink fluffy fun cannot be extended into mobile phones… oh the fun that could be had.