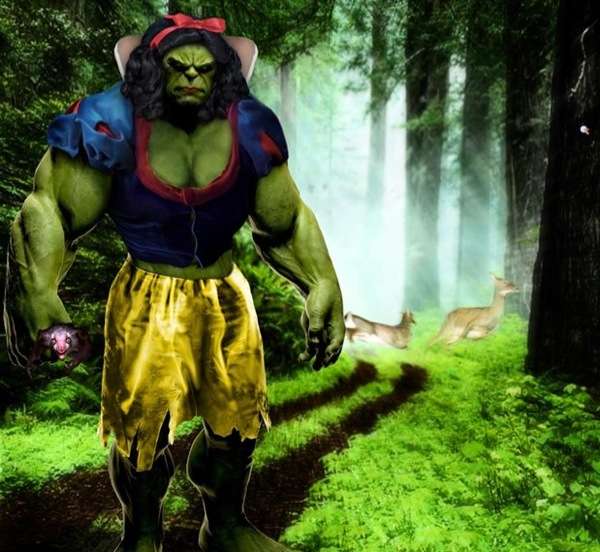 Jason Soy — February 28, 2012 — Pop Culture
References: worth1000 & blog.thaeger
Share on Facebook Share on Twitter Share on LinkedIn Share on Pinterest
Everything you loved as a child gets collided in these entries for Worth1000’s Marvel/Disney Hybrids 2 Photoshop contest. Master photo manipulators are invited to meld Marvel Comics and Disney characters in any way they saw fit, and the resulting images range from jaw-dropping awesomeness to chortle-inducing hilarity.

For instance, one Marvel/Disney Hybrids 2 entry depicts the Hulk as Snow White, adorned with her elegant blue and yellow dress, black hair and a red ribbon on his head. The juxtaposition of the muscular character in such effeminate clothing makes viewers burst out laughing in an office-disrupting manner.

Many contestants opted to incorporate the character of Hulk into their manipulations, perhaps because of his fluorescent green skin. Even Carl Fredricksen, the old man from Pixar’s Up, gets morphed into the radioactive monster.
6.4
Score
Popularity
Activity
Freshness
Get Better and Faster