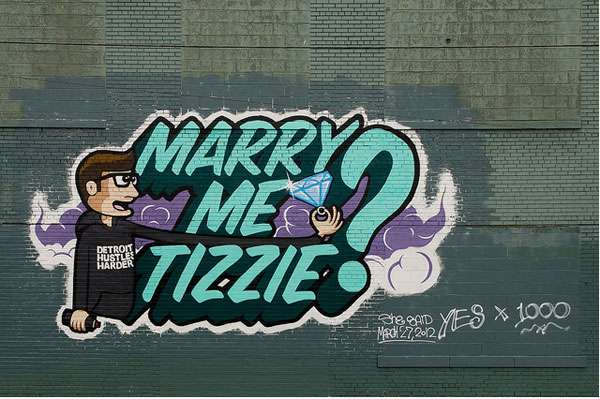 Jason Soy — April 6, 2012 — Art & Design
References: flickr & juxtapoz
Share on Facebook Share on Twitter Share on LinkedIn Share on Pinterest
Artists everywhere are making it that much harder for regular guys to propose marriage because of their excessively creative proposals, and this 'Marry Me Tizzie' graffiti piece is exemplary of that point. Not only is it well-executed, but being painted on public property, the artist’s declaration of love for “Tizzie” is now openly shared with the world. How are diamond-studded rings supposed to compete with such awesomeness?

Though the graffiti artist behind 'Marry Me Tizzie' remains anonymous, one can imagine the male figure in the piece is physically based on the proposer. The photo was taken by ExcuseMySarcasm, a Flickr user who documents street art found throughout America. He snapped this specific picture in Detroit’s Eastern Market.

For those wondering how the proposal went, you can see an update on the lower right corner that reads, “She said yes X 1000.”