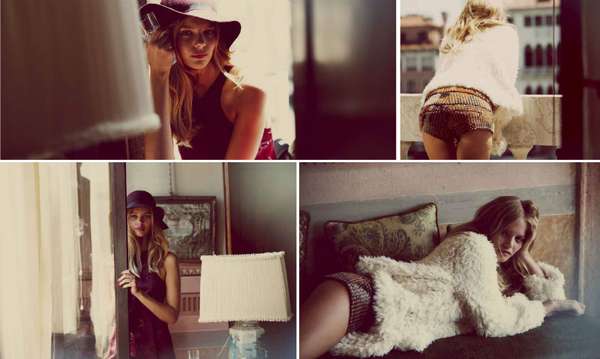 Jordan Sowunmi — August 2, 2011 — Marketing
References: freepeople & fashiongonerogue
Share on Facebook Share on Twitter Share on LinkedIn Share on Pinterest
The Marloes Horst Free People August 2011 Lookbook is the perfect example of what happens when you let one of the world's top supermodels run wild in a world class city whose architecture is as much a star of the shoot as the people in it.

The 22-year-old Dutch beauty resides in New York City now and maintains a comfortable position as the apple of eye of multiple high-fashion brands and photographers. In 2009, Horst scored the coveted position as face of fragrance Valentino, and earlier this year she was named the face of Calvin Klein swimwear.

In the Marloes Horst Free People August 2011 Lookbook, we see Horst as she stylishly strolls through Venice in a series of highly accessorized boho-chic outfits, complete with top hats, high-waisted belts, knit sweaters, scarves, and colorful crochet bags. The shoot blends contemporary hipster style with high-fashion, and the Lookbook is carried by Horst's ability to look aloof, sensual, and elegant.

Take a look through the Marloes Horst Free People August 2011 Lookbook to find out how this Dutch bombshell has captured the eyes of the fashion world.
6.9
Score
Popularity
Activity
Freshness
Access Advisory Services