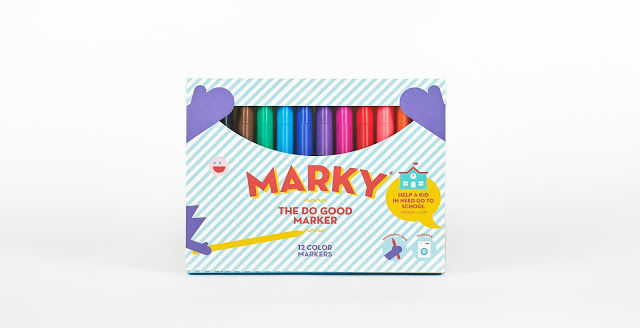 Laura McQuarrie — July 18, 2015 — Life-Stages
References: markymarkers & packagingoftheworld
'Marky' is a writing and drawing set that is branded as the "do-good marker" for good reason. For each package of markers that is sold, a part goes towards paying for a day of school for a child in need.

With each marker pack sold, Marky donates a portion of sales to some of the 250 children worldwide who are in need of elementary education, primarily through the Ninos de Guatemala NGO.

Being branded with a name like Marky seems that the box would be accompanied by a bold illustration of a fun character. But when the JAMJAM agency was developing the identity for this marker brand, the designers imagined that Marky would rather spend his time helping others than showing off his own face. Instead, we see hints of Marky that leaves the rest of his look up to a child's imagination.
2.7
Score
Popularity
Activity
Freshness