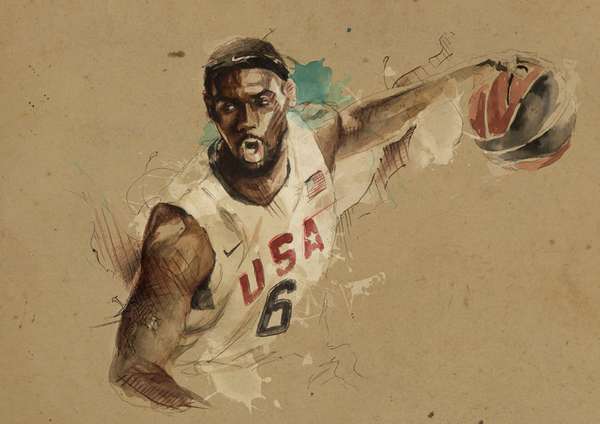 Jason Soy — February 29, 2012 — Pop Culture
References: mario-alba.deviantart & badredrobot.tumblr
Share on Facebook Share on Twitter Share on LinkedIn Share on Pinterest
It’s not often that you see star athletes as gallery-worthy artworks, but this Mario Alba rendering of Miami Heat small forward LeBron James definitely deserves some attention. As with most Alba illustrations, this particular image was created using a myriad of media. Inks, water colors and pencil marks are clearly visible in most of Alba’s works and they collaborate harmoniously to produce visuals that are rustic, yet wholly satisfying to look at.

Mario Alba is based in Barcelona, Spain, where he works as an illustrator and graphic artist. He often renders semi-realistic portraits of subjects while leaving portions of his creations unfinished for a more dramatic effect. Viewers are almost tempted to emulate his work because his process is so transparent, but they’ll quickly encounter much difficulty as Alba is a talent in a class of his own.
3.6
Score
Popularity
Activity
Freshness
View Innovation Webinars