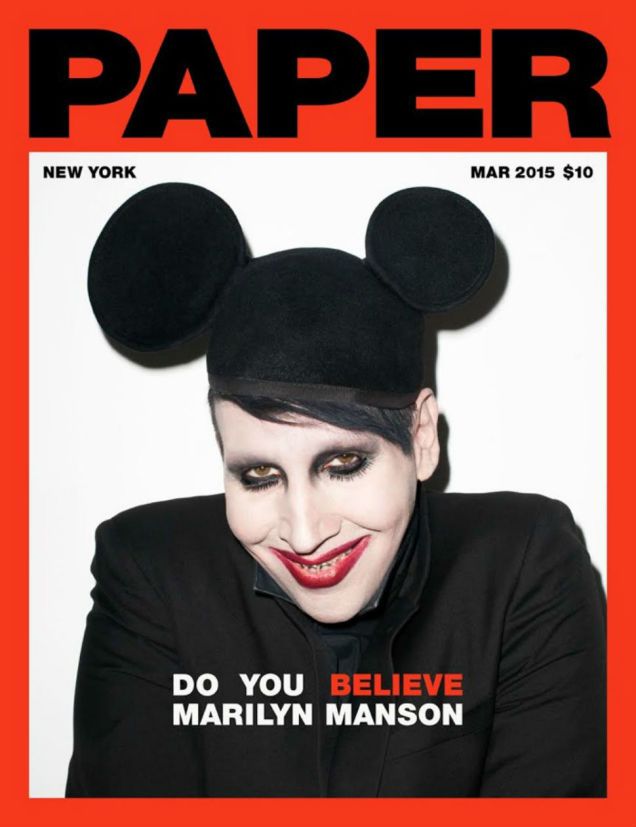 The Marilyn Manson Cover for Paper Magazine is Mildly Frightening

Vasiliki Marapas — February 11, 2015 — Pop Culture
References: papermag & themuse.jezebel
Share on Facebook Share on Twitter Share on LinkedIn Share on Pinterest
Paper Magazine's Kim Kardashian feature #broketheInternet last year, and the Marilyn Manson cover for the publication's latest issue sure as hell isn't going to rebuild it. If anything, the Internet is sinking deeper into degradation and decay as Manson smiles a Joker-esq grin at us.

The 46-year-old rocker, who fronts the eponymous band Marilyn Manson, has had his fair share of controversy, often surrounding his high-profile relationships (Rose McGowan, Dita Von Teese and Evan Rachel Wood) and public feuds (Billy Corgan, Courtney Love). He opens up about his past, present and future in the accompanying article.

However creepy this Marilyn Manson cover is, it's also kind of comforting in its consistency. What I'm trying to say is, you'll never have to worry about Marilyn Manson waking up one day and deciding not to put on eyeliner or freaking everybody out.
1.7
Score
Popularity
Activity
Freshness
View Innovation Webinars