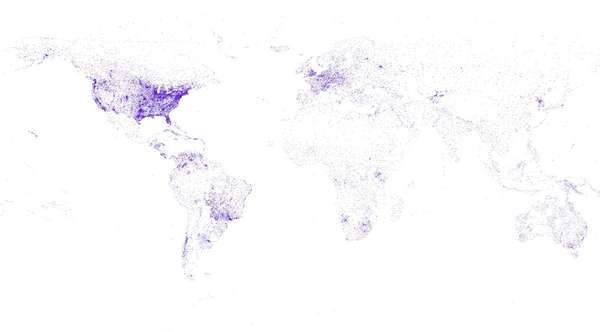 Jennifer Gosnell — June 27, 2013 — World
References: good.is & departful
Share on Facebook Share on Twitter Share on LinkedIn Share on Pinterest
The 'Map of the World in Runways' highlights the number of airport runways across the world. The highly dense areas, the United States in particular, speak to the number of people that travel in that area, as well as giving a general idea as to the wealth held in that vicinity.

Created by James Davenport, it is a fascinating perspective of the world that most people haven't seen before. "Despite any missing points, this stunning visualization still manages to showcase everything from dirt runways to major international airports in almost every country on earth," writes Departful's JP Bervoets. The most complete data comes from the United States, but the map has artfully put together a lot of data from all over the world to make a complete world view. The USA, Western Europe, parts of South America and the southern portion of Canada are starkly more airport runway-populated than the rest of the world, as can be seen clearly in the Map of the World in Runways.
1.8
Score
Popularity
Activity
Freshness
View Innovation Webinars

Surprisingly Accurate Maps
The World According to Americans Defies Stereotypes