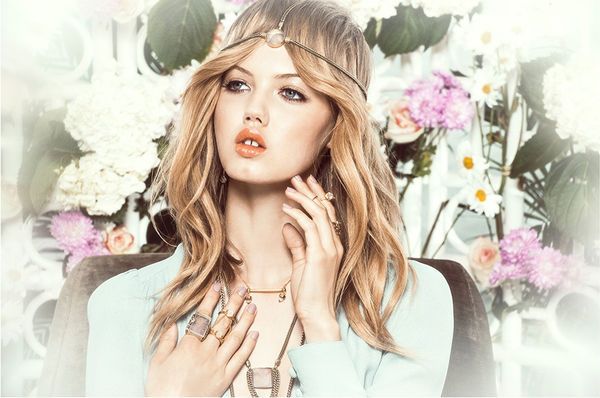 Meghan Young — February 5, 2014 — Fashion
References: themaniamania & fashionising
Share on Facebook Share on Twitter Share on LinkedIn Share on Pinterest
TItled 'Solstice,' the ManiaMania A/W 2014 ad campaign boasts a Wiccan theme that is softened by an otherwise whimsical ambiance. With brightened borders, lush settings and an almost flower child appeal, the photoshoot maintains the magic of summer while introducing subtly darker elements for the cooler season it is addressing.

Starring model Lindsey Wixson, who follows in the footsteps of Abbey Lee Kershaw and Dree Hemingway, the ManiaMania A/W 2014 ad campaign showcases a multitude of rings, bracelets and necklaces at once. Of course, it suits the bohemian style that is adopted for the photoshoot. The gold and quartz pieces are complemented with a soft retro hairstyle and peachy pout.