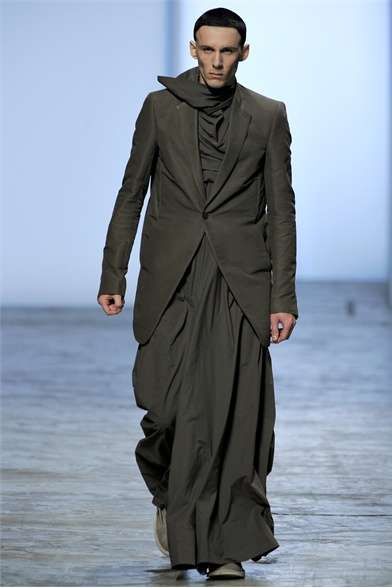 The modern monk-like models and creations of the fashion show were far from a display of confused identities... The men of Rick Owens know exactly who they are and are not afraid to express it through the proposed man skirts and floor-length tank dresses, combined with handsome jackets. The color combinations along with the Buddhist monk inspiration channel self-coonsciousness and the sandy beaches of South-East Asia.

Rick Owens manages to stretch the man skirt, and fits it successfully to the needs of modern day balanced masculinity. As the designer puts it, “I’m not going to sell tons of them, but if there’s anyone on the planet that can sell skirts to men, it’s me. Man skirts is a niche, but I like the niche.”

Implications - The definition of masculinity is constantly changing and fluidity between the sexes is increasing, as demonstrated by androgynous Rick Owens collection. The man skirts show how profoundly female garments can be reinterpreted to suit modern day males in a very intelligent way. This trend will further impact the marketing of products that are originally perceived as female, like cosmetics.
5.8
Score
Popularity
Activity
Freshness
Get the 2023 Trend Report FREE