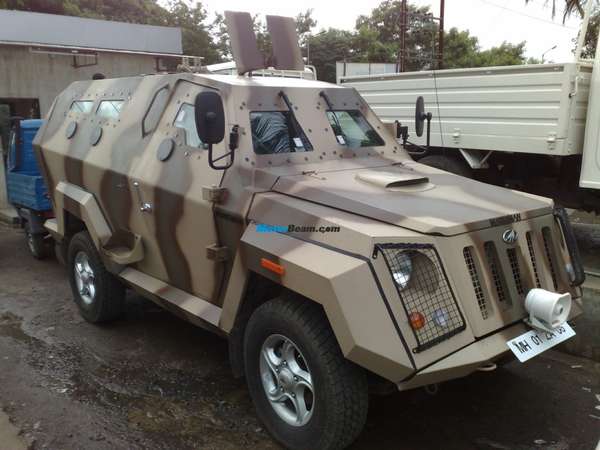 Is the Mahindra Marksman a Tank or a Hummer?

thischick — August 20, 2009 — Autos
References: mahindra & motorbeam
Share on Facebook Share on Twitter Share on LinkedIn Share on Pinterest
These images are of the all-new Mahindra Marksman, an all-new Hummer-inspired war tank. This behemoth is made by Mahindra Motors and has tons of awesome features such as a bulletproof exterior, extremely tough sides that can withstand three direct hits of Nato Ball M80s, the covered cupola with 270° swivel machine gun mount, seven crew firing ports, rearview camera, and TV screens for driver and co-driver.

The Mahindra Marksman reaches a top speed of 100 km/h and get this: Air conditioning is not standard but is available as an option. Now I don’t know about you, but if I was on board this thing in the middle of July with seven other crew members, you’d better believe I would be freaking out if there wasn’t any air conditioning.

The Mahindra Marksman will be going into production staff as a military defensive vehicle. There are possible plans for a civilian version to be produced, but if it doesn’t come with satellite radio I know for sure I wouldn’t want one.
4.3
Score
Popularity
Activity
Freshness
Get Better and Faster

Renegade US Soldiers Use Tank to Crush Iraqi Car

$200,000 Personal Tank
The Ripsaw for the Road Rage Warrior