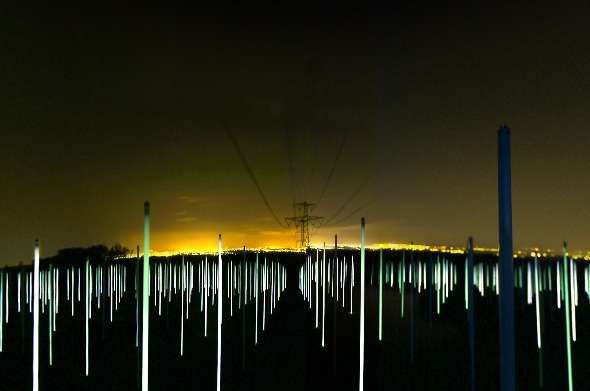 In his project, Richard Box combined nature with science as he laid 1,301 fluorescent bulbs on a 3,600 square metre field, with nothing above it but power lines.

The lights, which look like a freshly harvested wheat field, aren't plugged into anything, and they're not solar powered either. It's actually the magnetic radiation from the currents of electricity traveling above that give these bulbs their glowing juice.

Fluorescent tubes light up close to electricity, and power lines typically emit 400,000 volts, so it was more than enough to bring them to life.

The discovery by the artist-in-residence at Bristol University spawned from his fascination with light sabers and a conversation with a friend.

"He was telling me he used to play with a fluorescent tube under the pylons by his house," says Box. "He said it lit up like a light sabre."

That's all it took to spark his excitement; not long after, he handed a local farmer about $400 and began planting the bulbs which actually came from hospitals.

Although many people's first response might be, "What a clever way to spread awareness of the hazards of power lines," his real intention was nothing more than unlocking the power of science and making a new discovery.

There are plenty of images available for free online, but the real science connoisseurs will make a date of it by ordering the DVD of Box's work and enjoying the glow with a fellow nerdling.
2.1
Score
Popularity
Activity
Freshness
Access Advisory Services