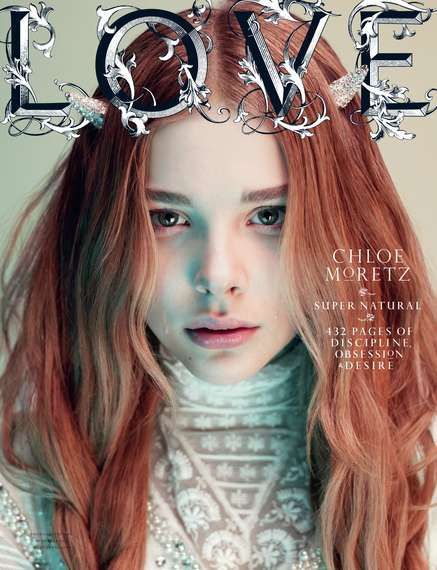 Corinne Guirgis — August 2, 2011 — Fashion
References: stylecaster & cocoperez
Share on Facebook Share on Twitter Share on LinkedIn Share on Pinterest
Fashion models are getting younger and younger, and it seems the younger they get, the fiercer their photos, because the LOVE Magazine Fall Issue Covers are captivatingly beautiful. Last week, the etherial cover shot of Elle Fanning, younger sister to famed child actress Dakota, hit the Internet to rave reviews, and since then, eight more covers have been released for the magazine's #6 Fall issue. Joining Fanning as cover girls are 14-year-old Hailee Steinfeld, who is taking over Hollywood with her recent Miu Miu campaign and Oscar nomination, Chloë Moretz and models Lara Stone, Mariacarla Boscono, Nyasha Matonhodze, Daphne Groeneveld and Kristen McMenamy.

Style Caster says of the covers: "The Super Natural issue, as #6 is being pegged, draws upon the other worldly beauty of these ladies – looking all melancholy, tearful, and more often than not, wearing some sort of odd headgear." The Mert and Marcus-shot and Katie Grand-styled covers are only a preview of what this incredible mag has in stor for the Fall issue!

Implications - Art and fashion publications that release issues on a seasonal, rather than monthly basis, are quickly taking over as the go-to sources in the fashion world. These mags appeal to the younger generation of fashionistas who are looking for something fresh and different by continuously releasing unconventional, avant-guarde photo shoots.
5.7
Score
Popularity
Activity
Freshness
Get Better and Faster