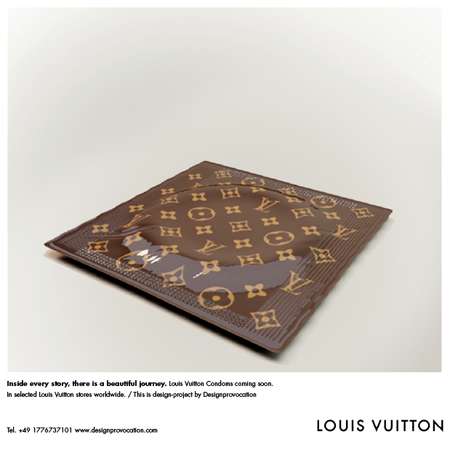 Emily Evans — May 7, 2011 — Naughty
References: slumz.boxden & designprovocation
Ever felt like your member was just too fancy for regular, run-of-the-mill condoms? If this is the case, you should definitely check out the Louis Vuitton condom -- it’s totally ballin'!

The Louis Vuitton Moet Hennessy (LVMH) group not only creates beautiful consumer products, but it is also socially conscious. The LVMH focuses on issues of public heath, so it doesn’t come as a surprise that it would introduce the super-fly Louis Vuitton condom.

Other designers have come out with high-end condoms in the past -- the Marc Jacobs condom comes to mind -- but the Louis Vuitton condom takes it one inch further. The Louis Vuitton condom not only comes with a branded condom wrapper, but the condom itself is ribbed with the LV logo. For $68, you can get up close and personal with these designer condoms.
5.2
Score
Popularity
Activity
Freshness